A full week later, my knees still hurt (note to self: investigate whether Springsteen has stock in ibuprofen manufacturing) and my voice is still hoarse enough to notice. (“No, I don’t have the nasty cold going around the library… just screamed my lungs out at a concert.” Sometimes this is met with the “you are crazy” look I’m quite familiar with, and that’s fine.) A full week later, I also still feel a silly grin spreading across my face when I think about those two concerts at Wrigley Field. My shoes have finally dried out, too. [in case you missed it… here’s my write-up of the weekend.]

There were so many great things about last weekend, both the shows themselves and the friends & events surrounding them. I keep forgetting that we got “Trapped” on the first night! My friend JD had asked what obscure songs we thought might show up at Wrigley, and “Trapped” was my first thought, so I had that “Yes! I called it!” moment which is always fun – and more than any other song, I think, that song benefited from the huge stadium and the open sky. It’s such a dynamic song, with brooding quiet verses busting wide open into the full-throated, soaring chorus (and the extra singers & horn section make that even bigger than it’s been in the past). It wasn’t the first time I’ve heard that song live, but it might have been my favorite time.

Saturday afternoon was spent with friends; it was a gorgeous, warm, sunny day and after eating some lunch (mmmm, Chicago pizza) we headed over to Wrigleyville to hang out. After sitting on the sidewalk in front of the stadium for a while the sun got to be a little much for us, so we wandered around the stadium in search of a shadier spot to hang out and listen to the soundcheck, if there was one. (There hadn’t been much of one the first night, probably due to getting stuck in rush hour traffic which Bruce mentioned during the show.) We ended up on a street corner on the backside of the stadium, and realized that this was where the vehicles carrying the band would be arriving at some point. Hmmmm, we thought. Why not? So we hung out for a while and, sure enough, we eventually had the opportunity to greet most of the band as they arrived in various vehicles and went into the stadium. Their entrance was about a block away from us; some of them waved, some of them didn’t. Bruce gave us a friendly wave but seemed to be a Man On A Mission and headed right into Wrigley instead of coming over to sign autographs (which he has been known to do).

This is just between me and you – you won’t tell anyone what a nerdy fangirl I am, will you? – but whenever I go to a Springsteen show, I carry with me (just in case) a copy of a poem I wrote a couple of years ago. It’s about a show I saw in 1978, and another show I saw in 2008, and about the pact between the band and the audience, and how magical it is that we are all still keeping our promises to one another after all these years. Someday, somehow, I would like to give a copy of that poem to Bruce. For just a moment on Saturday afternoon, I thought I might get my chance, and I tried to figure out what in the hell I would possibly say to him if that happened. It would probably have sounded like “ba-duh ba-duh um um um Bruce poem ummmmmmm” followed by me running away as fast as possible and hiding, so it may be just as well that it didn’t happen, heh.

Anyway, as we stood around listening to the sounds coming from the stadium, we realized that Bruce had indeed been focused on getting in there for a necessary soundcheck, as they began to rehearse “This Depression” – a song that had been played only a couple of times before. It sounded phenomenal, and we were pretty hopeful that Tom Morello would join in for that song (he appears on the recorded version of it). Later on, as Dave & Leann & I waited (somewhat) patiently in Section A for the show to begin, we caught sight of someone carrying a familiar ice-blue guitar across the field, so we knew for sure Morello was in the house, and we were pretty excited about that.

I’d never lurked around a stadium to listen to a soundcheck before, and I’d never hung around to see the band arrive before; it may have been a step over the line from reasonable fandom to obsessive fandom, but it was a fun afternoon with friends all the same. Also fun: at the end of night 1 I’d noticed that Bruce didn’t disappear directly backstage but took the long way to his exit, greeting fans on that side of the field as he left. For night 2, we were way over on the edge of that side of the field, so we waited a few minutes and sure enough, despite the fact that it was still pouring rain, here comes Bruce, laughing and dancing and calling out “Fuck yeah!” and waving to us. Pretty cool really.

If I have one regret about the weekend, it’s that I didn’t pace myself. I went completely crazy the first night with the screaming and dancing and jumping up and down, which is probably why my knee did a popping sort of trick as I walked onto Wrigley Field on Saturday and has been bothering me ever since. I had to sit down several times during the show on Saturday, which is really unlike me at a Springsteen show – sometimes I’ll sit during a very quiet song and close my eyes and just soak it in, but usually I am up and dancing or at least physically paying attention with every muscle in my body. That, as well as the fact that for much of the night (until the rain thinned out the crowd!) I could see only glimpses of the stage (ah, the life of a 5 foot 1 person), left me feeling just a tiny bit disconnected from the music – at least as compared to the first night, when I was completely immersed in it and overtaken by it. The second night was still really great, but it’s more fun when you can dance without pain and when you can mostly see. (Thank goodness for the giant video screens; I could see one of those, only slightly blocked by a lighting tower, and the videographers on the tour are very good – but it’s still more fun when you get to decide for yourself which band member has got your attention at any given moment.)

Apparently my friends and I weren’t the only ones having fun that weekend. Check out this installment of “The Nightwatchman Speaks,” in which Tom Morello geeks out about how great it was: 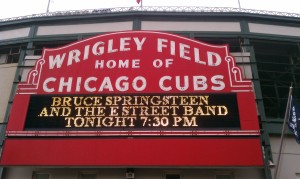 Yeah, so things got hectic all of a sudden… I swear I’m going to keep this blog up better than I did the old one.

I’m out of town for a bit, so will probably have a longer post in the next few days. Meanwhile, I wanted to share a link. I went to two Springsteen shows at Wrigley Field over the weekend, and had the BEST time – and wrote a post for Blogness on the Edge of Town about my experience. It goes way beyond just a concert, way beyond entertainment. I think I have even more to say about it, actually – Springsteen shows apparently make me HAVE ALL THE FEELINGS and want to WRITE ALL THE WORDS – but since it’s late and I have to get up in the morning, you can go read my review on Blogness. (Feel free to comment there, or here.)

I guess it’s not even so much a review as an appreciation. Which is good, because Tom Morello himself tweeted a link to it and called it “lovely” – serious critics shouldn’t care what the subject of their review might think, and I have to say it completely, totally made my day to get a compliment from Tom Morello. (He was one of the guest performers at the Springsteen shows, Eddie Vedder being the other. Read the review, appreciation, thinger, whatever if you want the details.) And to anyone who wonders why I love Twitter, that right there would be one of the reasons – something like that would NEVER have happened without that particular tool.