I tend to be a little quiet in January, I think. Something about the cold, and the stillness of being in the heart of winter. (Even though, compared to places like Minnesota or even where I grew up in northern Indiana, the winters here in Bloomington aren’t that bad. It’s unusual for us to have more than a couple of deep snows – by which I mean the kind you have to shovel if you want to get your car out of the driveway – in any given winter.) 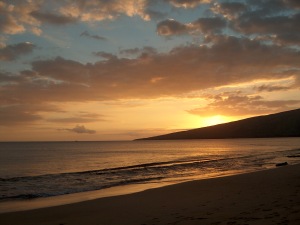 I’m thinking back fondly on a couple of midwinter trips to Maui. I went in February both times – the first was totally on a whim, spurred by stumbling across a truly amazing airfare. It was shortly after 9/11/01, and people just weren’t traveling by air very much at all. Americans weren’t going to Hawaii because it involved significant air travel, and folks from other parts of the world weren’t in a hurry to jet themselves over to the U.S. either. So I found an airfare that probably covered the airline’s cost and not much more, and although I didn’t even have a whole week of vacation time to spare, I headed for Maui – and promptly fell in love. I’ve said many times that when I got off the plane at the Kahului airport, having boarded in the gray, wintry Midwest, it was like that moment in “The Wizard of Oz” where Dorothy opens the door and the movie suddenly goes from black-and-white to color.

Even though I can’t go back to Maui this year, I can still almost feel the warm water I snorkeled in, can almost taste the incredible fresh pineapples and mangoes and bananas. Before I went to Maui, I didn’t even realize there were different kinds of bananas! Around here, there are just … bananas. I had apple bananas for the first time on that trip, and it was like a whole new world. And don’t get me started on the coffee there! So, so good.

What I love about having great experiences (travel, and concerts, and so on) is how they stay with you even years later. In the below-zero wind chills we’ve been facing these last few days, sometimes I find myself closing my eyes and dreaming back to Maui. Knowing it’s still out there, waiting for me…

Here’s a whale poem I wrote after my second visit to that beautiful island. It appears in my chapbook, Breach.

That moment of pure and waiting silence
knowing she was near, then O!
the breach, explosion into air, so close
I felt it in my bones like a great drum

struck. Then struck again. The dark
curve of her body fell toward us
as she crashed back into sea, mountain
of a whale, the mammalian world of her

all I knew just then, all I could take in.
I don’t know if I breathed
until she breached again, and yet again,
great muscular mountain of a whale, sonic

boom of a whale, whole planet of a whale,
wrenching breath from us as we stood
gasping on the drifting boat.
And then the holy stillness.

For those moments we each became
whale, breathing of her, surrounded
by her power, her arc and crash
an actual gravitational force as sure

as heartbeats rocking the salt water
world within the womb. She raised
up her body, her whole cetacean self,
between us and her new calf,

sleek and vulnerable to our well-meant
intrusions. The echo of her sounded
in my own warm-blooded body as my hands
touched before my chest like prayer: